The Foundation for A Healing Among Nations

Pir Vilayat Khan, a Sufi, urges us to consider pain in this way

Overcome any bitterness that may have come because you were not up to the magnitude of pain that was entrusted to you.Like the mother of the world who carries the pain of the world in her heart, each one of us is part of her heart, and therefore endowed with a certain measure of cosmic pain. You are sharing in the totality of that pain. You are called upon to meet it in joy instead of self pity.

We must remember, what we are forgiving is not the act-not the violence. We are forgiving the actors, the people who could not manage to honor and cherish their own lives in a loving and gentle way. We are forgiving their suffering, their confusion, their desperation, their ignorance, and their humanity. Through forgiveness we are all set free to go our own ways and follow our tradition, dharma and spiritual destiny

Maha Ghosananda, a respected Cambodian monk went into the refugee camps where thousands of Cambodians had fled the terrible holocaust conducted by Pol Pot. Every family had lost children, spouses, and parents to the ravages of genocide, and their homes and temples had been destroyed. Maha Ghosanada
announced to the refugees that there would be a Buddhist ceremony the next day, and all who wished to come would be welcome.Since Buddhism had been desecrated by Pol Pot, people were curious if anyone would go. The next day, over ten thousand refugees converged at the meeting place to share in the ceremony. It was an enormous gathering. Maha Gosananda sat for some time in silence on a platform in front of the crowd. Then he began chanting the invocations that begin the Buddhist ceremony, and people started weeping. They had been through so much sorrow, so much difficulty, that just to hear the sound of those familiar words again was precious.

Some wondered what Maha Ghosanada would say. What could one possibly say to this group of people? What he did next, in the company of thousands of refugees,was begin to repeat the verse from the Dhammapada, a sacred Buddist scripture.

Hatred never ceases by hatred;
But love alone is healed.
This is an ancient and eternal law

Over and over again Maha Ghosananda chanted this verse. These were people who has as much cause to hate as anyone on earth. Yet as he sat there, repeating this verse over and over, one by one, thousands of voices joined together in unison: “Hatred never ceases by hatred: but by love alone is healed. This is an ancient and eternal law.”Out of the mouths of people who had been wounded, oppressed, made homeless, aggrieved, and crushed by the pain of war, came a prayer proclaiming the ancient truth about love, a truth that was greater than all the sorrows they had seen and felt.

Legacy of the Heart,Wayne Muller

Ette Hillesum, a victim of the Nazi concentration camps , writes of the healing surrender into grief and forgiveness: “And you must be able to bear your sorrow;even if it seems to crush you, you will be able to stand up again, for human beings are so strong, and your sorrow must become an integral part of yourself;you musn’t run away from it.

Do not relive your feelings through hatred, do not seek to avenge on all Germans, for they too, feel sorrow at this moment. Give your sorrow all the space and shelter in yourself that is it’s due, for if everyone bears grief honestly and courageously, the sorrow that now fills the world will abate. But if you do
instead reserve most of the space inside you for hatred and thoughts of revenge- for which new sorrows will be born for others-then sorrow will never cease in this world. And if you have given sorrow the space it demands, then you may truly say: life is beautiful and so rich that it makes you want to believe in God.

When we judge, when we hate, when we harden our eyes and hearts, we perpetuate great harm to ourselves and the world, and we lose the way to peace and healing.Mercy and nonviolence bring healing and peace. We must first stop the war within ourselves. This is the way of Ahimsa-nonharming and noninjury.

In separateness, lies the world’s great misery, said the Buddha.

A human being is a part of the whole called by us “Universe,” a part limited in time and space. He experiences himself, his thoughts and feelings as something separated from the rest-a kind of optical delusion of his consciousness. This delusion is a kind of prison for us, restricting us to our personal desires and to affection for a few persons nearest to us. Our task must be to free ourselves from this prison by widening our circle of compassion to embrace all living creatures and the whole of nature in its beauty.
– Albert Einstein
Dear Creator of All Life and to the Spirit of All Sentient Beings, we ask that as the millennium approaches here on planet Earth,the hearts and spirits of all humankind be filled with an intense awareness of Love and Peace. We send our heart energy and light to
all people everywhere and ask that Divine Guidance fill the hearts of leaders-at all levels and in all sides of conflict-until they experience the grace of forgiveness and the power of Divine Love which is the source of all healing. We pray for those people who are suffering, for those who are injured and in pain as the result of conflict and war in those places where fear instead of love governs. We ask that the National and World Karma that is created by the action of any nation, be tempered with Divine Love and that perfect Divine Order restore us all to a place of harmony and Highest Good for all. Thank you, and so it is. Amen. wova

From the Point of Light within the Mind of God Let Light stream forth into the minds of men and women Let Light descend on Earth.
From the Point of Love within the Heart of God Let Love stream forth into the hearts of men and womenMay love descend on Earth.
From the center where the Will of God is known Let purpose guide the little wills of men and women The purpose which the Masters know and serve.
From the center which we call the Race of Man Let Love and Light restore the Plan on Earth
And may it seal the door where evil dwells.
Let Light and Love and Power Restore the Plan on Earth.
Let thy Soul lend its ear to every cry of pain like as the lotus bares its heart to drink the morning sun.
Let not the fierce sun dry one tear of pain before thyself has wiped it from the sufferer’s eye.
But let each burning human tear drop on thy heart and there remain; nor ever brush it off until the pain that caused it, is removed.These tears, O thou of heart most merciful, these are the streams that irrigate the fields of charity immortal. Voice of the Silence, Blavatsky

I am a way by which men may achieve.
I am a source of strength, enabling them to stand.
I am a beam of light, shining upon their way.
And this I stand.

And standing thus revolve
And tread this way the ways of men and women,
And know the ways of God.
And thus I stand.

The Mantram of Unification

The sons of men and women are one and I am one with them.
I seek to love, not hate;
I seek to serve and not exact due service:
I seek to heal, not hurt.

Let pain bring due reward of light and love.
Let the soul control the outer form, and life and all events
And bring to light the love that underlies the happenings of the time.

May the power of the One Life pour through the group of all true servers
May the Love of the One Soul characterize the Lives
of all who seek to aid the great ones.
May we fulfil our part in the One Work
Through self forgetfulness
Harmlessness and right speech
Blessings and Love for the Welfare of the World

This Is The Truth About The Self: 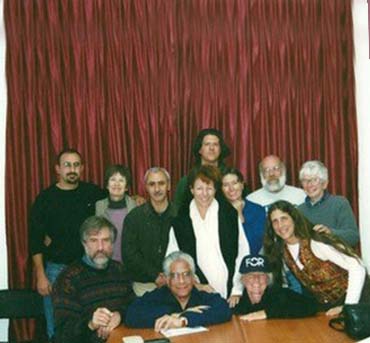 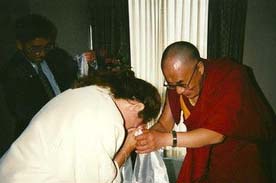 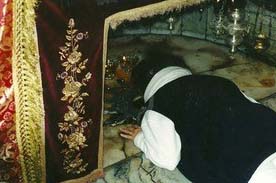